Apple has released the iOS 12.5.7 update for older iPhones

watchOS 9.2 arrives more than three months after the release of watchOS 9, which saw the arrival of new watch faces, an optimized Workout app, sleep stages, a redesigned Compass app and a new Medications app.

Here are the complete release notes:

The “Mosaic of Unity” dial is composed of various geometric shapes in green, black, red and yellow, and as the minutes roll by, each number merges with pieces of other numbers to transform into a new shape. iPhone owners can also show their support with the new Unity lock screen wallpaper.

To update watchOS, open the Watch app on the iPhone, select General and from here “Software Update”. From watchOS 6 it is possible to update directly on Apple Watch: the smartwatch must be connected to WiFi, the Settings app opens on Apple Watch from here tap General > Software update. If a software update is available, just tap Install and follow the onscreen instructions.

All the articles that talk about iPhone, iPad, Mac and Apple Watch are available at their respective links. 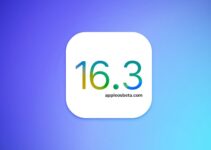